I don’t want to give the impression that all I will discuss in this blog is the starting rotations of well-known clubs but usually I am inspired to do research about subjects based on current news.  So in this case, the news that the Cubs placed Carlos Zambrano on the disabled list.  Initally, before the season started I thought the Cubs rotation should be Carlos Zambrano, Ted Lilly, Jason Marquis, Rich Hill, and Sean Marshall and have Sean Gallagher in AAA, with Jon Leiber and Ryan Dempster being in the bullpen.  Well, with Ryan Dempster being the Cubs best starter the whole season and Sean Gallagher doing a solid job in the rotation through ten starts, Rich Hill and Sean Marshall have both been starting in Des Moines, Iowa with the AAA farm club.  Initially when I heard the news about Rich Hill getting sent down I was stunned.  My view of Rich Hill in 2005 was a shaky, young-left hander.  In 2006 he was an OK starter for the Cubs, but in 2007 he was as good as a #2 starter and a part of the Cubs rotation for years to come.  Hill was entering the prime of his career this season, but after only 5 starts in Chicago he was sent down to Triple A. 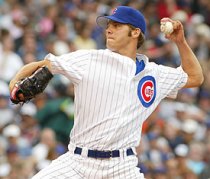 Hill was not even that bad in his starts (1-0, 4.12 ERA) but somehow in AAA, Hill hasn’t find his groove so far.  Get ready for ugliness, here are Rich Hill’s Triple A numbers this year in seven starts – 2 wins, 4 losses, and a 5.88 ERA.  Marshall currently is also starting in Iowa and has been much better – 1-1 with a 3.41 ERA in seven starts as well.  The Cubs are one of the best teams in the majors, so one would think that bringing Rich Hill up over Sean Marshall would be too risky for a team on a roll, even if they did just get swept by the Rays.  The possiblility of Rich Hill turning it around after he gets the trust of Jim Hendry and Lou Piniella is there, but Sean Marshall really needs a chance to start in the majors.  He’s turning 26  and has always been the guy “called down to make room for _____ coming off the DL, or “to make room on the roster after the transaction, the Cubs sent down Sean Marshall”  Marshall has been sent to the bullpen numerous times with the Cubs, even though it seems to me that Marshall is much better suited as a starter. 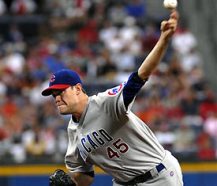 He has exceptional stamina and the key to his success his mixing his speeds, and deception.  That type of pitcher is better suited to be a starter.  I have to say,  as much as it surprised me to see Rich Hill get sent down, I have to call Sean Marshall up if I’m the Cubs.  I’m not even going to mention the fact that the Cubs have Jon Lieber who could start theoretically.  Theoretically being the key word.  Leiber hasn’t been a solid starter for three years and he is 38 years old.  Don’t change something that’s not broken, yes Cubs, that means keep Jon Lieber in the ‘pen, and hope he can keep up the groove he’s in at this point (3.06 ERA this year, 1.78 ERA in his last ten appearances).