That’s right.  My man Nelson Cruz (pictured) finally
got the call.  If you don’t get what
I am talking about, then read the very last paragraph of this
entry.  Cruz has been the best hitter in
the minors above rookie ball.  Yes, I
admit Roberto
Lopez and Jaff
Decker have been better in their limited time.

Cruz was on fire before his injury (which only kept him out for a
week), and after he came back.  I know
I’ve said it before, but Cruz’s
numbers are SICK.  1.123 OPS?  Why should I even be surprised he’s having
such a great season?  He did the exact
same thing with Oklahoma last year!

But everything isn’t as
great as it appears.  Will Nelson
actually start?  The answer, at least so
far, is no.  The worst part is the
Rangers have a very good argument of why Cruz is not as good as Marlon Byrd or Brandon Boggs.  Boggs is playing great, taking a lot of
walks and hitting for occasional power, although the lack of pop is seriously
noticeable compared to Cruz’s.

Boggs and Byrd are playing
very well with a combined .386 OBP and 3 home runs within the past ten
games.

Boggs (left) has been playing
continually better since getting called up in late April.  He has a .382 OBP with two homers the past
ten games.  But here’s something
interesting.  Look at Brandon
Boggs’ numbers at AAA.  Then compare
those stats to Nelson
Cruz’s stats at AAA.  If Boggs can
be a serviceable starting player in the majors, consider how great Cruz can
be.  Ever since Cruz started putting up
these numbers, he’s never gotten called back up, before now.  Remember, the numbers Cruz put up last year
at AAA, were after his time with Texas.

Now it’s time to talk
Marlon Byrd.  Byrd enjoyed a breakout
season last year after Kenny Lofton left, but struggled early this season.  Byrd had a .268 OBP on June 1st
with only one home run.  But after
slowly getting better in June, Byrd went on a tear in late July and early
August. 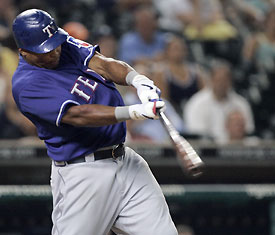 Obviously, Byrd couldn’t keep
it up, but still is playing well with a .390 OBP and six RBI in his last ten
games.  I really don’t think Byrd is a
starting player on a championship team.

I don’t mean to say I
think the Rangers could be a championship team, but just commenting on the type of
a player Byrd is.  I believe that’s a
good way of evaluating a player.  Think
about it this way: if a clone of that player played at every position, could
that team’s offense be good enough win the World Series?  Don’t take it literally.  Juan Uribe is a below average starting
player, yet he was the shortstop for the 2005 Chi Sox.  But, evaluation wise, it’s a good question
to ask yourself when determining how good a player is.

For me, out of all the
players, the most interesting to watch the rest of the season will be Nelson
Cruz.  This call up could make or break
his entire career.  If he fails, he could
be considered one of the greatest Four-A players of all time.

How about a crazy
prediction?  Actually, not really
crazy.  This is my true prediction
for Nelson Cruz the rest of the year:

Let’s see how close I will
be…